Sexual abuse in yoga – the secret we can’t ignore

It’s been exposed in the Catholic Church, television industry and most recently Hollywood. Now sexual abuse in yoga is the latest secret scandal that’s been ignored for years, says Genny Wilkinson-Priest

In 2001, Katie* travelled to South India on a two month retreat to practice and study with a senior Ashtanga yoga teacher. Heartbroken and vulnerable after a breakup and redundancy, she travelled alone to immerse herself in the healing and safe environment of an ancient, spiritual practice in order to find a sense of clarity and calm. 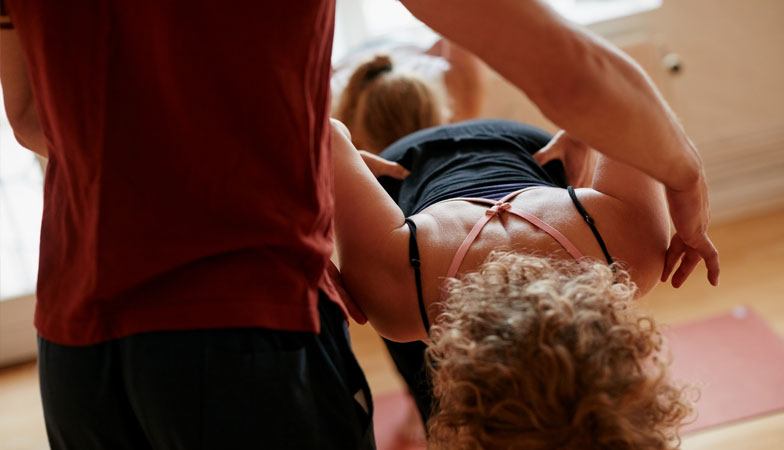 ‘I was at that early stage of my yoga practice where I was really in love with it and felt that there was nothing more important than getting on my mat,’ the now 43-year-old said.

Katie had heard amazing things about a European yoga teacher who ran retreats in South India and her hopes for learning more about the sacred teachings of yoga with him were high. What she didn’t anticipate was a full-on and repeated sexual assault over the course of eight weeks.

It started first when the teacher would grab, squeeze and move Katie’s breasts as she folded forward in a pose called Marichyasana A – a seated posture on which one knee is bent and the other straight and the student wraps their arm around the bent leg and folds forward. Then, he would use, as she described, his intimidating personality and position of  authority to try to persuade her to ‘finish’ her practice in his bedroom down the hall.  Katie deftly averted this but couldn’t avoid his relentless pursuit in the yoga room. 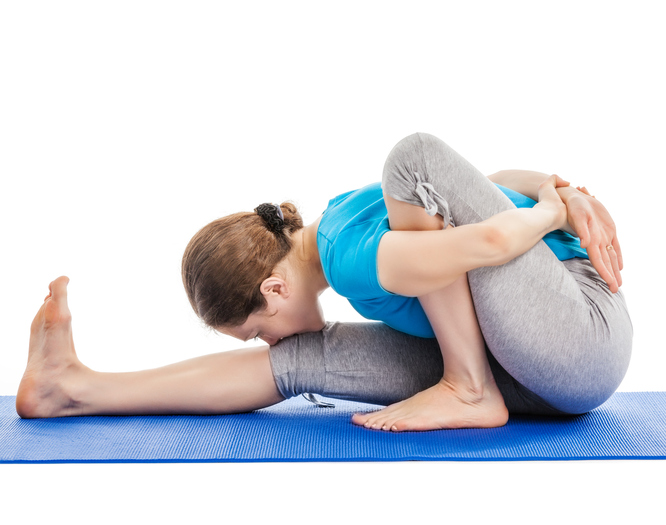 The chronic assault culminated when Katie was practising Supta Padangusthasana, a posture where the student lies down facing upwards and holding the big toe of one leg, opens the leg wide to one side. Teachers commonly help a student move the leg wider by kneeling down on the floor by the student and gently assist an external rotation and abduction of the thigh bone, by pressing on the outer pelvic bone.

‘He placed his thumb between my legs on my clitoris and made circular movements. I thought maybe his hand had slipped. But he did it again on my last day there, and I knew there was absolutely no way it was a mistake.’ 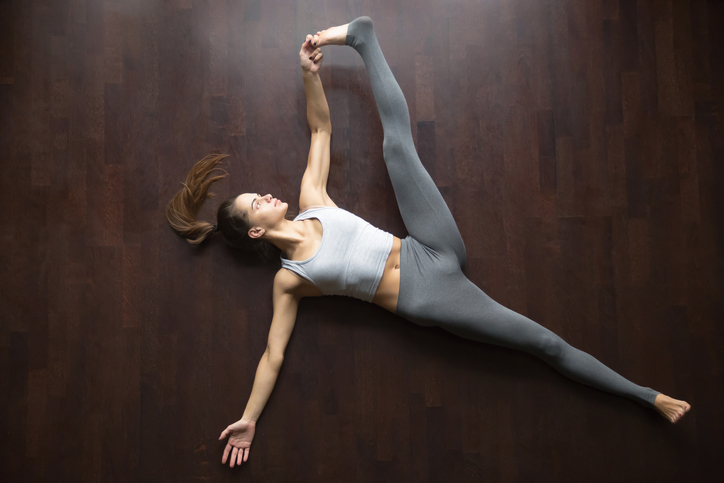 I didn’t even want to admit it was a sexual assault. For years I have been thinking about this

Katie said she felt a range of emotions from confusion to anger, yet was too paralysed by her youth and vulnerability to take any action and challenge a yoga teacher held in such high regard by so many. ‘I didn’t know what to do, and I didn’t even want to admit it was a sexual assault. For years I have been thinking about this, and now with all these women standing up and talking about the abuse they have suffered, I can say yes, categorically this teacher sexually assaulted me.’

The upheaval in societal norms around the sexual misconduct and violation of women that began in Hollywood with accusations against famed film producer Harvey Weinstein has rippled to Congress in Washington DC, newsrooms in New York and now to yoga schools in India and around the world. It’s only now with the birth of the #metoo movement that the power structures that have enabled such abuse are being exposed – but not yet broken down.

The wholesome image of yoga has taken a hit this week after Mary Taylor, one of the first Western women to study yoga with Ashtanga Yoga creator Pattabhi Jois, wrote a blog saying she knew Jois had for years in the 1980s and 1990s sexually assaulted female students. Those in the tight Ashtanga community had whispered about it in quiet corners but not until now has a teacher of Taylor’s stature stepped forward, emboldened by the #metoo movement.

Taylor said Jois’ family and senior students asked the revered teacher to stop pressing his fingers into his female student’s perenium when practicing pindasana (see pose below), and to cease touching their breasts when providing adjustments – a key feature of the Ashtanga system – during practice. 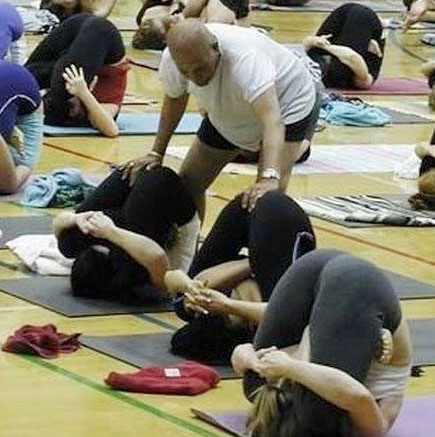 ‘Time would pass and the cycle would begin again,’ Taylor, who co-founded The Yoga Workshop with her husband Richard Freeman, wrote in her Dec 8 blog. ‘Until at one point senior students and family demanded in no uncertain terms that he stop, and he did. To my knowledge, he never did any of those horrible assists again.’

A deeply uncomfortable conversation is now underway in the close-knit yoga community as more women like Katie come forward with shocking stories of their trust misplaced and their bodies violated amid the dark shadows of an often misogynistic, male-dominated world. Some teachers are elevated to the status of a guru, a Sanskrit word that means “revealer of light,” and the ensuing veneration can have an effect of inflating the ego to such a degree that the teacher feels he can do what he wants, when he wants – answerable to no one.

Jois, who died in 2009, is hardly the first internationally known yoga teacher to come under scrutiny amid charges of sexual misconduct and abuse of power. Bikram Choudhury, eponymous creator of Bikram yoga, fled to India and has yet to pay a $6.4 millionUS in punitive damages awarded in a 2016 U.S. civil lawsuit related to sexual misconduct and rape. Lewd stories paint him demanding massages from his students as he made them watch Bollywood films until 3am, launching into homophobic rants at the end of class, and bragging about 72-hour sex marathons. 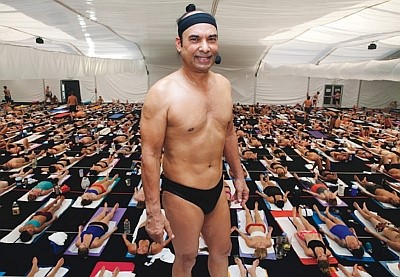 Bikram Choudhury is yet to pay a $6.4 million in damages related to sexual misconduct and rape

Anusara founder John Friend in 2012 allegedly had affairs with several of his married students amid Wiccan-like group sex rituals. That same year, four yoga students filed charges against their teacher Dr. Kausthub Desikachar, accusing the grandson of the godfather of Western yoga Krishnamacharya of sexual, mental and emotional abuse.

In Australia, a Royal Commission in 2016 issued a report on the allegations of child sexual abuse at the Satyananda Yoga Ashram by the school’s former spiritual leader in the 1970s and 1980s. Abuse survivors were, the report said, sexually abused by Swami Akhandananda Saraswati who would summon children to his room to massage him and then perform oral sex .

He bullied, humiliated and derided me in front of 50 students for not knowing how to count to 17 in Sanskrit

Abuse can be far ranging but none of it is insignificant.  Nearly ten years ago, I paid a large sum of money to attend an internationally known yoga teacher’s intensive training. Whatever awe I held for him dissipated when he bullied, humiliated and derided me in front of 50 students for not knowing how to count to 17 in Sanskrit. I recall several students came up to me afterwards, asking if I was OK. I was, but wondered what was the point of the public dressing down? Was it just an alpha dog marking his territory against a strong woman? Or was there really a lesson in there for me?

This is of course not to say that all yoga teachers abuse their position of power. The vast majority of teachers I know though my job as the yoga manager at Europe’s biggest yoga studio are kind, honest and devoted to serving their students with the best of intentions. My own teacher, while human and not without fault, has more integrity than anyone I know. I have practiced with him every day for 14 years and his adjustments have ranged from the gentle and directional, to intense and energetic. Never once have I felt anything untoward. 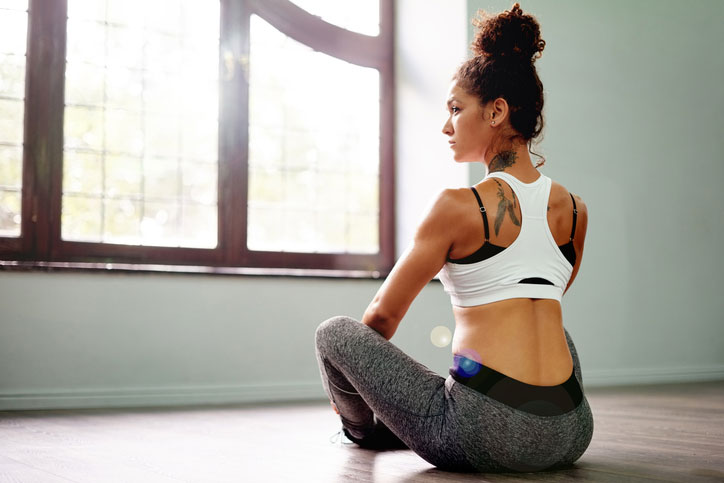 I asked him how he, as a senior teacher, maintains his strong moral principles amid the temptations of a strong power dynamic where prestige, class and status result in hierarchies that affect interactions in both subtle and over ways.

‘One word – boundaries. Respect them and keep all your relationships clean’, said Hamish Hendry, a certified Ashtanga Yoga teacher and director at Astanga Yoga London. ‘Real abuse in yoga world does go on. Men abuse their power and play on women’s vulnerabilities and self-doubts.’

The guru-disciple relationship is often considered a key aspect in the transmission of yoga and most traditions in India historically placed a strong emphasis on its intensity, asking total fealty and obedience on the part of the student.

Yoga first travelled west in 1893 with Swami Vivekananda’s speech to the Parliament of the World’s Religions in Chicago and was made popular by the Beatles in the 1960s with their interest in Transcendental Mediation. Indian teachers like Jois travelled to the U.S. in the late 20th Century, importing the demands of the traditional guru-disciple interaction where authority and power were deployed alongside rituals of veneration like kneeling before the teacher and kissing their feet.

‘Western students may take on exaggerated forms of deference that they see performed in yoga and Buddhist communities,’ said Dr. Jean Byrne, co-director of The Yoga Space in Perth and holds a Ph.D. in Eastern Philosophy and Feminist Theory. ‘This deference is often combined with a lack of critical thought and a deep desire to belong. The belonging these communities provide make collusion and silence regarding sexual harassment and assault difficult to come to terms with both individually and collectively. When people speak out they are often met with a deafening silence, or victim blaming.’

Indeed the international Ashtanga community is embroiled in the fallout of the Jois scandal as teachers consider what role they might have played covering it up by failing to speak up, students pin blame on cultural differences, and critics of the system ambulance chase the story.

Sexual harassment has polluted the yoga space – how do we move out of it? Eunice Laurel, a yoga teacher who specializes in teaching survivors of trauma, said students must feel comfortable coming forward. ‘We need to acknowledge the misconduct, affirm our support for survivors, apologise if we did not believe them, condemn current and future abuse, and support each other as by speaking openly and truthfully,’ Laurel said.

All Katie can ask for now is an apology. ‘I’d like him to say yes, I did it. I’m a creep and I’ll never do it again.’

*Not her real name

Have you experienced sexual abuse of any kind in yoga? Share your story in complete confidence direct with Healthista Editor Anna Magee by emailing anna@healthista.com

Genny is the Yoga Manager at Triyoga where she teaches Ashtanga, Hot Yoga and Vinyasa Flow. She is also the editor of Pushpam Magazine.

Which yoga should I do? This personality test will help