Echinacea has been touted as the cure for the common cold, but what’s the real, solid evidence behind it? Healthista editor Anna Magee takes a look

As the weather turns colder, there’s one thing few of us will be looking forward to – sniffles, sneezes, coughs, colds and the dreaded flu.

In fact, with a massive epidemic of flu in the Southern Hemisphere reported this year, record numbers of cases are predicted to hit the UK.

In Australia, a recent flu pandemic affected a staggering 300,000 people in 2019 and it’s expected the UK’s cold season will result in thousands of cases of flu this winter.

It’s meant that the NHS is now offering flu jabs to 25 million people, in their biggest anti-flu campaign yet.

But the flu jab is only offered to school children and the over 65s. So what if you’re not in that bracket?

There’s one thing that for years has been hailed as a natural cold prevention and treatment remedy – echinacea.

And if you’re anything like me, you probably wonder – each year in fact – whether a) you should take echinacea, or something like it, to help boost your immune system and keep colds at bay and b) once the cold has hit, can it help make it go away quicker?

But what’s the actual evidence for echinacea’s effectiveness? And what is it proven to actually do?

Let’s look at the evidence.

Proven effect #1: It can prevent colds by strengthening the immune system 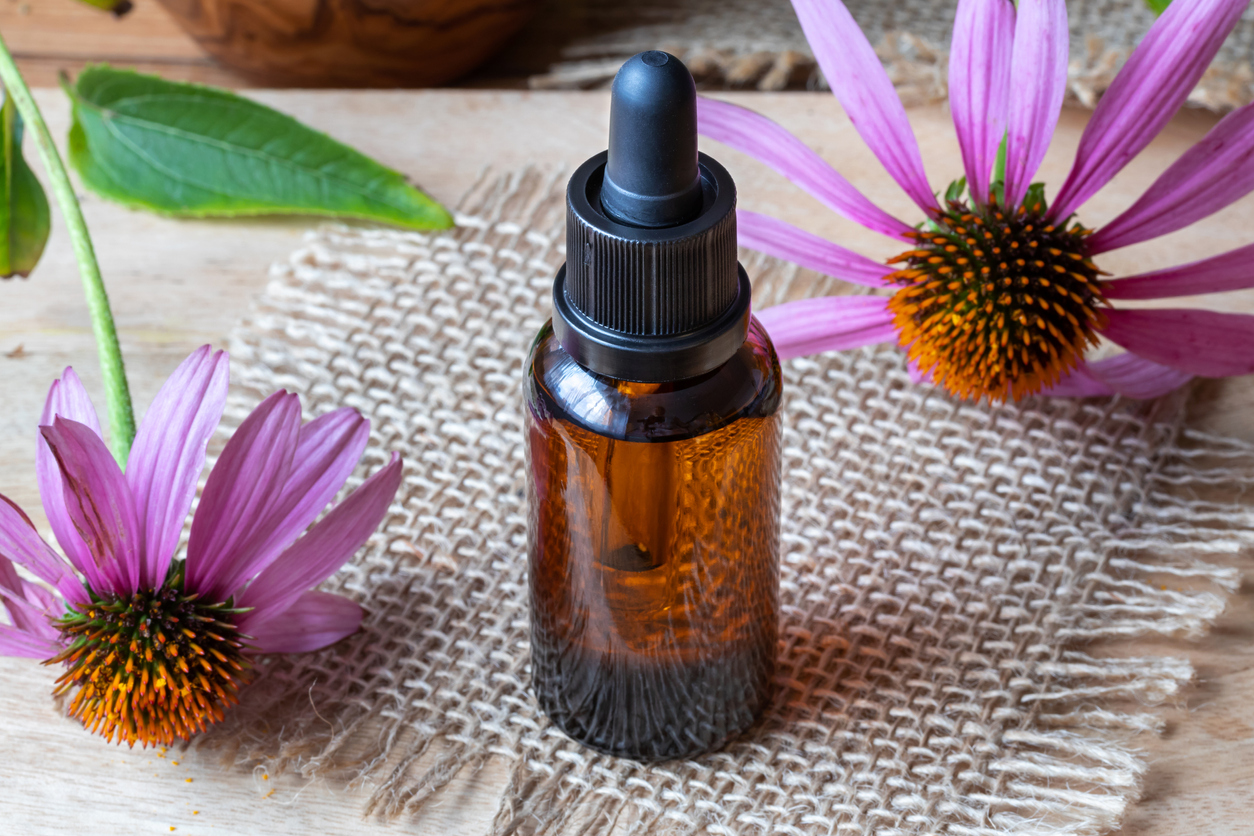 British adults get around 5-6 colds a year. But if you have a strong immune response your body might fight a virus before it even shows symptoms.

‘However certain factors can curtail your immune response making you more susceptible to developing symptoms when you catch a virus,’ says leading immunologist  Dr Walton.

Things that weaken our immune response include stress – which is why you catch cold when you’re under pressure and run down. ‘Stress hormones change the way your body responds to pathogens it is exposed to; weakening its ability to fight them.’

Other factors that weaken your immune response include obesity – those with a BMI over 40 are at a greater risk of more severe infections, Dr Walton points out – as well as a lack of sleep and exercise.

But how can we stimulate our own immune response to help us fight those pesky pathogens before they become a cold or flu?

‘The over-use of decongestants can often mean you end up with more mucus than when you started,’ says Dr Walton. ‘It’s why as researchers we are looking more at traditional treatments and looking at how they might help, both in the prevention and treatment of a cold or flu’.

One of the key remedies being studied by Dr Walton and his team at Imperial College London is echinacea.

‘As the weather changes, we become more vulnerable to viruses and bacteria,’ says Dr Walton. ‘The key to staying well lies first and foremost with eating a healthy diet and getting enough exercise and sleep.

‘In addition, echinacea is a herb that has been shown to prevent the symptoms of a common cold erupting.’

In 2012, 755 participants took part in the longest and largest trial thus far by the Common Cold Centre in Cardiff on the preventative use of echinacea over a four month period.

‘The research found that the development of recurrent colds reduced by 59 per cent as well as the severity of cold symptoms.

‘The need to use painkillers also fell by over half, the number of colds reduced as well as the number of days cold symptoms were experienced,’ he concludes.

Recommendations are to take Echinaforce Echinacea Drops  (also available to buy in the US) – the brand used in the trial – in water three times a day for prevention and if you get a cold, increase the dose to five times daily.

Proven effect #2: It works to prevent colds in children

In fact, all primary school children will be offered the flu jab for the first time under the new NHS campaign. This is because – according to Public Health England – schoolchildren act as ‘super spreaders’ of flu. 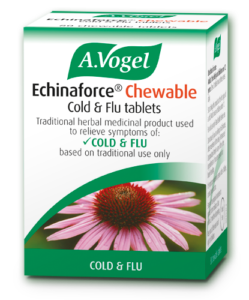 One study in 2018 looked at the use of echinacea for cold and flu prevention and treatment in children.  303 children aged 4-12 years old were given either Echinaforce chewable echinacea for kids or vitamin C for four months.

What’s more, there were almost 76.3 per cent fewer antibiotic prescriptions in the group of children taking antibiotics.

The children in the trial were taking one Echinaforce Chewable Echinacea three times a day.

It’s one thing to get a cold but another to get a cold that never seems to go away. And, when that happens in children, it’s even more frustrating.

But in a study on echinacea use for cold and flu treatment in children with colds, 80 children aged 4-12 years old were observed for a period of just over five months.

Currently in the UK, echinacea can only prescribed to children 12 years and over, but the research took place in Europe where Echinaforce is licensed for children four years and over. 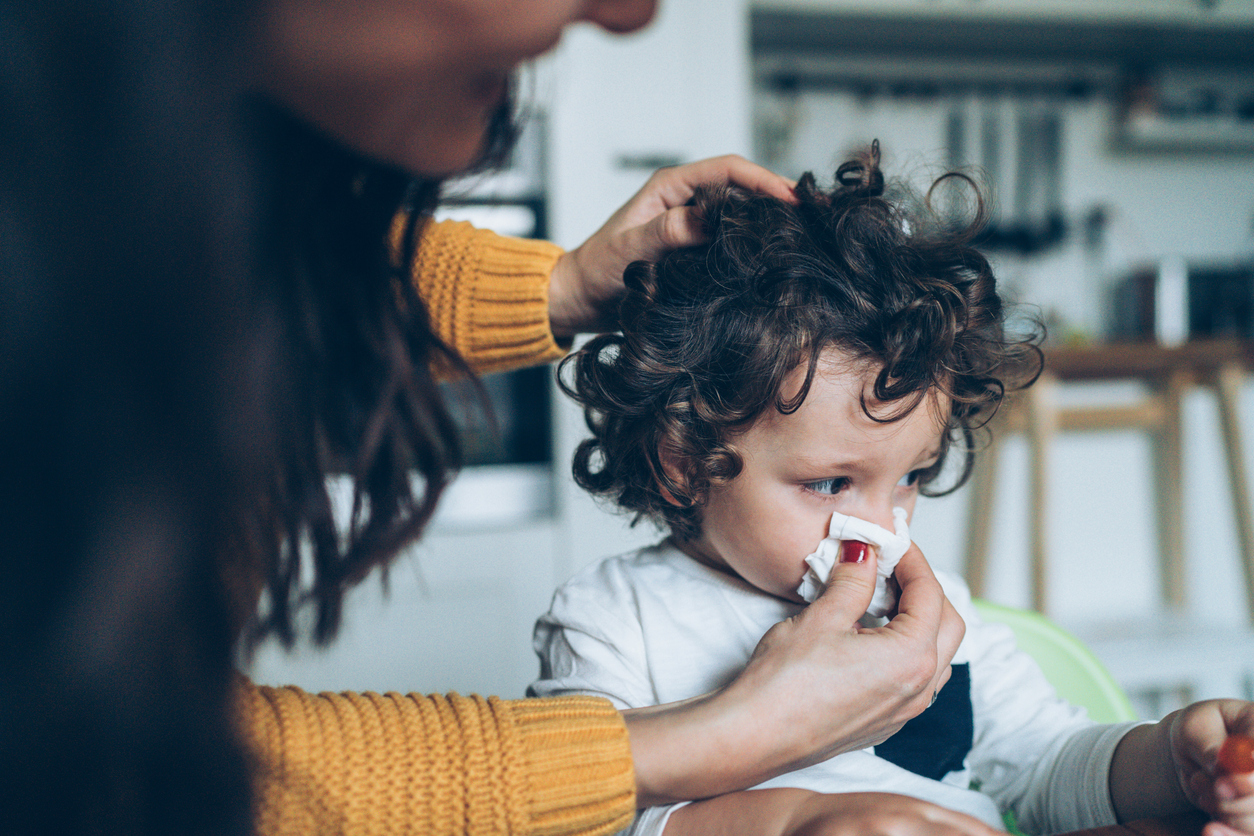 Respiratory tract infections (RTIs) – which is a blanket term for infections of the chest, nose and throat – are a major clinical issue leading to a high number of hospitalisations.

Research by Professor Sebastian Johnston at the Royal Society of Medicine showed that echinacea extract in the form of Echinaforce Drops (taken in water) significantly reduces recurrent RTIs and consequently the risk of complications from them such as bronchitis and pneumonia.

The study was a meta-analysis of previous research in six clinical trials involving 2458 participants. It found that recurring RTIs were reduced by 35 per cent and concluded the overall risk of developing complications from a cold was reduced by approximately half in the echinacea group.

Those in the study were taking Echinaforce Echinacea Drops. 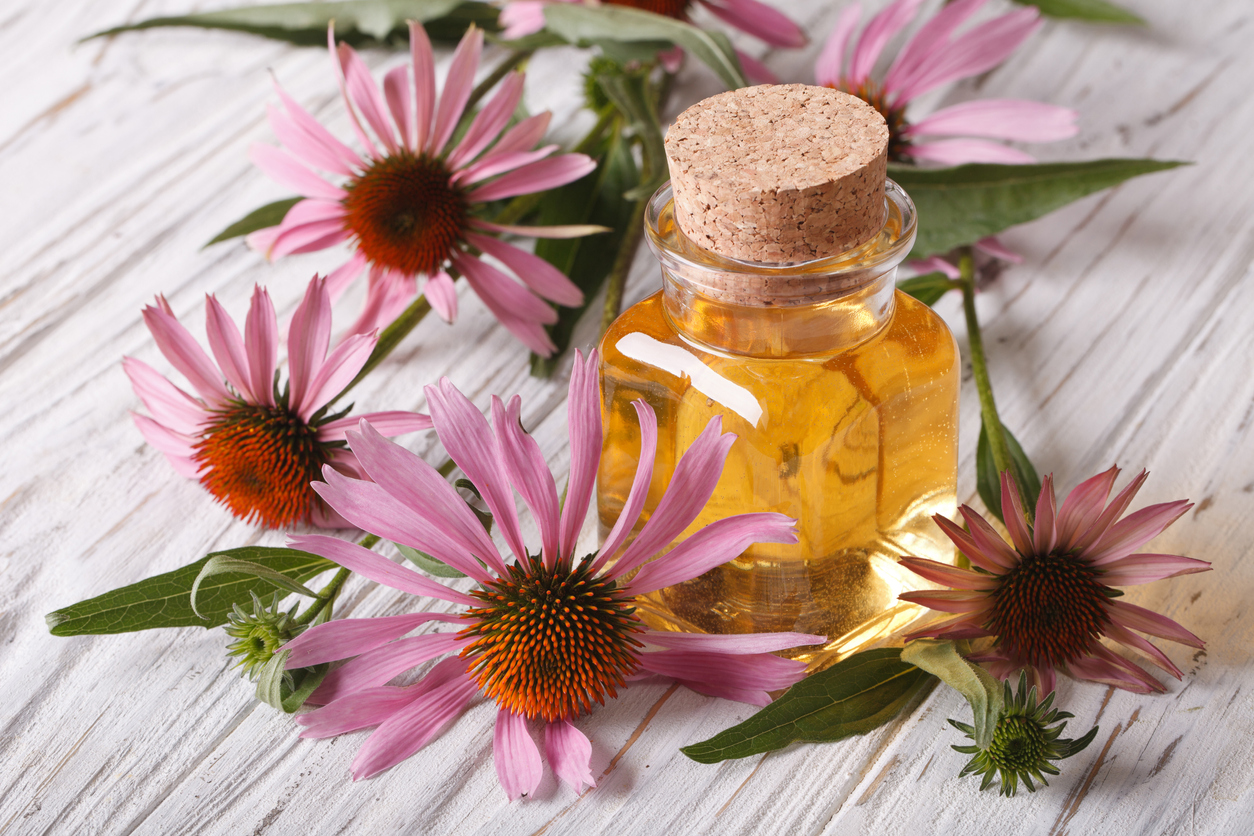 You know that thing where you get a cold and you think it’s over but then you get a worse one with the symptoms of full-blown flu – or the symptoms just won’t go away, or perhaps moves to your chest.

That’s known as a ‘secondary infection’ and is often the time when doctors will prescribe medication, such as Oseltamivir, an anti-viral medicine also known as Tamiflu.

‘Treatments such as Oseltamivir are the current ‘gold standard’ for flu treatment. However, limitations regarding side effects and the emergence we’re seeing of drug resistant viral flu strains really spells a need for alternative treatments,’ says Dr Walton.

One randomised placebo-controlled clinical trial followed 473 people spilt into two groups with flu diagnosed by their GPs, over ten days, comparing the outcomes of treatment with Echinaforce Hot Drink (echinacea combined with black elderberry, also available to buy in the US) in one group and Oseltamivir in another.

The research, published in 2015 in the journal Current Therapeutic Research found that Echinaforce Hot Drink was as effective as Oseltamivir in shortening the duration of symptoms.

The latter also experienced five times more gastrointestinal complaints (a known side effect of the flu meds) than the Echinaforce group.

‘In this study, Echinaforce Hot Drink was as effective as Oseltamivir, in terms of both shortening flu symptoms and reducing respiratory complications as well as fewer side effects, especially gastrointestinal,’ says Dr Walton.

In 2013, scientists measured the effects of fresh echinacea extract against the dried variety and found that the fresh extract – this is the one used in Echinaforce products used in the research here – offered ten times ore anti-viral activity than the dried herbs used in many echinacea products.

Unlike other echinacea products based on the dried herbs, Echinaforce combines anti-inflammatory action of the root, the anti-viral properties of the herb and the immune strengthening benefits of both to provide maximum protection from cold and flu relief of symptoms when infection occurs.

The research found that Echinaforce cut the number of colds suffered by people with weak immune systems or prone to recurrent infections by nearly 60 per cent.

With a potential flu epidemic predicted to hot the UK, looking at priming your immune system with echinacea is worth doing this winter as there is plenty of evidence to support its effectiveness.

The A.Vogel range is available from avogel.co.uk as well as at Boots, Holland & Barrett as well as health stores and pharmacies nationwide.

IBS? Constant coughs and colds? Why antibiotics could be to blame

Should you REALLY feed a cold?  The GP’s guide to 9 cold myths

Are you addicted to love?