Pelvic Floor FAQ’s – here’s what you need to know

Regardless of age or whether you have or haven’t had a baby, all women should know about their pelvic floor. Athlete and coach for The Well Baz Moffat answers some need to know FAQ’s

When elite athlete and mother of two Baz Moffat decided to become a women’s health coach at 38, she felt embarrassed that she didn’t know what the pelvic floor was or what it was supposed to do.

She vaguely knew it was around the bottom area, as most of us do, but that was it.

The Pelvic Floor (PF) is a group of muscles and ligaments that attach within your pelvis, suspended like a hammock, connecting to your pubic bone at the front and your coccyx at the back. Essentially, your PF is there to prevent your guts falling out!

your PF is there to prevent your guts falling out!

It’s pretty simple but ridiculously complex all at the same time – mainly because it’s such a private, sensitive and vulnerable part of a woman.

This is as much as we need to know – women’s health physios and gynaecologists need to know plenty more about the anatomy of the pelvic floor but for everyone else that’s enough. 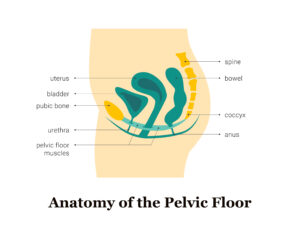 What should it do?

Like every muscle, the PF should be able to contract and relax and it should have a good range of motion.

This is a key point because mostly what one hears about the pelvic floor if they have an issue with it is that they must do ‘more work’, but that is just an over-simplification.

Like any part of the body that’s not working as it should, the fix is rarely off the shelf or standardised. The athletic pelvic floor is no different.

Your pelvic floor should be able to:

Stop everything falling out – if you didn’t have a pelvic floor your gut, bladder, bowel, and uterus would be on the floor. This sounds basic, but it is truly this straightforward – the pelvic floor is there to hold everything up.

Keep you dry – your pelvic floor should be able to stop you from leaking urine, wind, or stool. Which means that if you are doing impact sports, like netball, sprints or trampolining, your pelvic floor needs to be much stronger than it does for someone who does a bit of gym or whose exercise choice is walking.

We know that female athletes have much higher rates of urinary incontinence, (can’t hold their pee.) Annoyingly though, not enough is known about why.

Relax on the loo – your pelvic floor should be able to relax enough when you are on the toilet that you can fully empty your bladder and bowel (more on this later).

How does it work?

Ten years ago, the language surrounding the pelvic floor was all about gripping, clenching and holding and having stability, which implied that if women athletes weren’t stable they were unstable – which is not a useful phrase.

Now we know that the optimal state for the core is to be coordinated and balanced and not statically strong.

It’s designed to move with your breath, and resist pressure from above

The PF is a fundamental part of this balanced core, it must be as strong, mobile, and coordinated as the rest of the unit. It’s also important to note that the pelvic floor is not designed to be on for ages.

You can’t go for a run and hold your PF throughout. You cannot do a vinyasa flow sequence and keep your PF lifted, it just doesn’t work like this.

It’s designed to move with your breath, and resist pressure from above (laugh, cough, sneeze, holding breath), and below (running, jumping.) 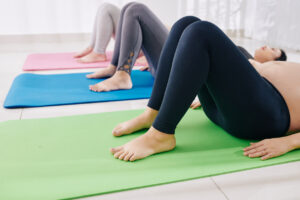 The pelvic floor works with your deep core, coordinating with your back, abdominal muscles, and diaphragm. They all work in harmony, which makes for a dynamically strong core.

Let’s start with the pelvic floor and diaphragm connection first. They are both domed-shaped muscles and should work together most of the time.

If you are doing very heavy lifting or jumps that require you to hold your breath then you use your core very differently, but the rest of the time the diaphragm and pelvic floor should be working together.

The diaphragm drops, allowing the lungs to fill with air, which makes total sense, and if you do a couple of conscious breaths now, you’ll feel that.

It’s what we call a balanced core:  everything is working together.

Inhale – lungs fill and the diaphragm has dropped. The pelvic floor will also relax as the internal organs move down slightly – you don’t make an effort to do this, it should just be happening.

On the exhale your diaphragm starts to lift, pushing the air out of the lungs and the pelvic floor comes with it – slightly. It contracts at the same level as the diaphragm.

This is how the deep core should be working most of the time. It’s what we call a balanced core:  everything is working together. It’s a piston moving up and down, inhale down, exhale lift.

And now that we know that our whole system is connected it should be no surprise that the other muscles in your core get involved too, including your trans abs (transverse abdominis, the formal name) and deep back muscles.

the other muscles in your core get involved too, including your trans abs

As we inhale, our tummy should be nice and soft and relaxed, and it should expand slightly, along with our lower back. (These are all really subtle moves which you won’t be aware of unless you focus your attention on it.)

The piston has moved down. And as we start to exhale – diaphragm and PF are lifting and the lower back and abs are drawing in slightly – they’re not gripping, holding, or crunching, they’re just drawing in and providing our core with support. It’s what we call dynamic support.

What are the symptoms that indicate your pelvic floor may not working so well?

Wetting yourself, lower back pain, painful sex, struggling to insert or hold in tampons, feelings of heaviness, pelvic pain, unable to control wind and bowel incontinence – a pretty grim list.

It takes women seven years, on average, to talk to their GP if they are suffering from some of these symptoms.

It takes women seven years, on average, to talk to their GP if they are suffering

It can be hard talking about this stuff so if you think you’ll bottle it, write down your concerns, be as specific as you can and give that to your GP. 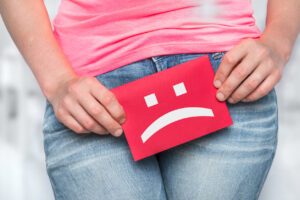 I only leak a bit and just when I’m running, so can’t I just ignore this?

Nope, you can’t ignore this. Well, you can – but our advice is that you shouldn’t. Leaking is a sign that your body is not effectively managing what you’re asking it to do.

Sadly, unlike our teeth, we can’t replace our pelvic floor, so we need it to last for as long as possible and the sooner you get on it the better – although it’s never too late.

Is there a quick fix other than Pelvic Floor exercises?

Sorry, no. You’ll find plenty of products and procedures out there which claim to be ‘the solution’ but there is no magic bullet when it comes to your pelvic floor.

It does such a lot of fundamental stuff and it needs our daily attention.

How often do I need to do my exercises and how do I do them?

If you have no issues, then once a day every day is a good place to start.

Use the NHS Squeezy App and make sure you have some initial guidance as to how to do your exercises properly – either from a Women’s Health Practitioner, trained coach or Pilates teacher who can guide you.

Do men have PF’s?

Yep, they sure do. But they don’t have a vagina, babies or go through the menopause – all of which makes the female pelvic floor a bit more susceptible to ‘issues’. 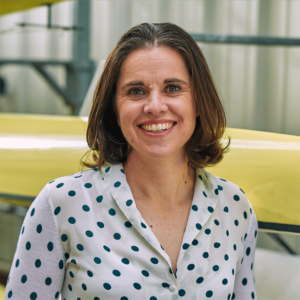 Baz Moffat is The Coach for The Well, providing health, well-being and performance support for women based on the science of the female body.