I never thought I would try jiu jitsu. Honestly, I’ve never pictured myself participating in any form of physical fighting. But this past week, I did – more on that coming soon.  The most valuable part of my jiu jitsu trial? The conversation I had with my coach for the day: four-time British National Champion, three-time European Champion, and 2015 World No Gi Champion, Sam Cook. 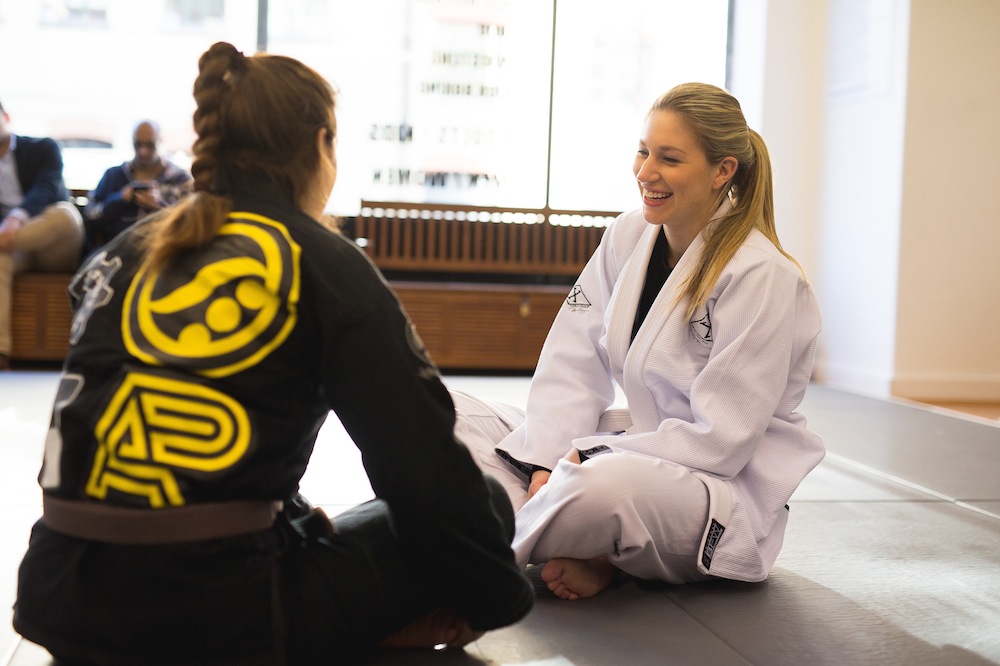 The 28 year-old from Kingswood took time away from her preparation for the The Abu Dhabi Grand Slam Jiu-Jitsu World Tour, beginning this weekend, to introduce me to the sport.  In doing so, she bestowed upon me a number of valuable things: the discovery that my body could find itself in contraptions and contortions I never thought possible, valuable ways to get out of those contortions, especially in the real-life event that I might need to (self-defense), and some seriously useful advice that extends far beyond the mat.

Sam disclosed to me her methods in succeeding as a fighter and as a woman, methods every woman ought to incorporate into her approach to fear, aspiration, and everyday life

I may not have managed to get the ‘sweep’ down, but I did learn the value of a fighter’s mindset, and how you can apply it to your own life in ways that will never involve a black eye. Sam disclosed to me her methods in succeeding as a fighter and as a woman, methods every woman ought to incorporate into her approach to fear, aspiration, and everyday life.

Here are 10 ways to tap into your inner fighter:

Sam says: ‘I had a bit of a tricky time during my purple belt where I just lost a lot of self-belief and I couldn’t see myself winning, even though I’d won the last two European’s – I kind of just thought they were a fluke. So I sought some advice from a sports performance coach, and he helped me to visualize the win. That sounds really cliché, but it really helped me. So, for mental preparation, I think about the first thing I’m going to do – I try not to think about anything else. It just helps me focus and stay motivated and then I believe that I can’t lose. I genuinely think I’m not going to lose because I’ve already seen it, I know what’s going to happen. I believe it.’

Allow yourself the recognition of smaller achievements – these are important. Acknowledging progress in any situation is crucial in making your end goal a reality. Also, it’s a way to be nicer to yourself. Get excited about achieving something that might be minor, it’s practice for when you achieve something major.

Sam says: ‘I thrive on positive feedback. Even though I might be the smaller or weaker person against the guys, if I’ve managed to get this one little sweep or this position on this person I’ve not managed to get before, that really motivates me. Focus on the positives and always remind yourself of those good things you did in the day rather than the negative’

3. Use the Underdog Effect

You’re the underdog? Run with it. Nothing could be more motivating than having the odds stacked against you. Leverage your ‘underdog’ status against your opponent instead of accepting it as a disadvantage. Doubt is a powerful thing – it’s even more powerful if you use it.

Sam says: ‘I tend to convince myself that I’m the underdog. With the guys,’ –who she often trains with– ‘it’s not so much that I’m competing against them, because I’m not, we’re on the same team. Great guys – love them to bits. But it’s just so rewarding when that girl [they] were crushing last week is now kicking [their] ass. It’s just so empowering, and I can’t express this enough to the girls – we’re not competing against them,’ she smirks, ‘but [winning] is still nice.’ 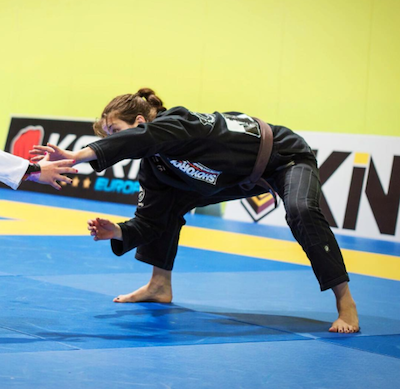 4. Tap into the thing that makes you WANT it

Everyone is competitive. Sources and levels of competitiveness may vary, but it’s in there somewhere. Find what makes you want to win and don’t shy away from it.

Sam says: ‘I’ve always been competitive. I want to test myself against the best in the world, I want see how I match up. There’s always a hunger for the win. It’s always there, under the surface.’

When asked about her plans in continuing with jiu jitsu, she laughs and says,

‘I really want to focus on getting that black belt world title. Once I have that, then I’ll reassess the situation.’

5. Play on your own strengths

There are many ways to do something, many routes to success. Believe in your own. Just because the way you might go about something differs from someone else’s doesn’t mean it’s any less effective. Play on your own strengths and, if permitting, stick to the style the suits you best.

Sam says: ‘There’s such a wide variety of people who come into the sport. You have your athletic women or your stronger women but then you also have your kind of geeky women who don’t look athletic, but because they use intelligence to figure out the techniques, they pick it up just as quickly.’

When asked about her own style, she says:

‘I’m kind of an in betweener. I have the strength and athleticism to survive with the older people, but also, I have to understand [the technique]. If I don’t understand it I won’t be able to implement it.’

Life, and especially jiu jitsu, presents you with uncomfortable, chaotic, adrenaline filled situations. The key is being able to sort through these factors and maintain a sense of composure and focus.

Sam says ‘Jiu jitsu puts you in a situation where you’re under a lot of stress, where you’re in danger and someone’s on top of you and you need to be able to stay calm and think logically through the steps, find out where your danger points are or where you’re safe. If you’re able to manage the stress of someone being this far away from your face, you’ll be able to manage different stresses of daily life.’

7. Keep your ego in check (especially when you lose)

I’d gone and won the World Championships and then I’m working at a bar in Bank, and these bankers and accountants have no idea who I am – there’s nothing more humbling than that

Being able to pry yourself away from a situation and apply it to the ‘bigger picture’ can really help to reduce pressure you might be putting on yourself. Both success and failure are subject to relativity – keep your ego and your worries in check with that.

Sam says: ‘You can be the best at whatever you are in whatever area of work you’re in, but to somebody else, you’re nobody. In that sense, jiu jitsu is very humbling. When I first moved to London, I was trying to make some extra money and I was working at a bar. I’d gone and won the World Championships and then I’m working at a bar in Bank, and these bankers and accountants have no idea who I am,’ she laughs, ‘there’s nothing more humbling than that.’

Cook after winning the 2015 World No Gi Jiu Jitsu Championship

8. Accept what you can’t control

There will always be some degree of a situation that is outside of your control – accept it as that. Beating yourself up over things you can’t change is a waste of energy. Be adaptable, work around these variables.

Sam says: ‘I have a bit of a routine before I compete, to feel ready. But I don’t rely on it because things can go wrong. Some people, if they’re not in the right mental place, little hiccups can make everything go wrong. It’s about knowing how to get your focus regardless of what’s going on. It’s about being able to channel your adrenaline while also staying calm.’

Listening to your favorite song before you begin something important or nerve-racking may not be a life-altering self-help philosophy but it can put you in a better mood. Little additions to your preparation routine can do a lot for your state of mind. You wore that lucky pair of socks? Yeah, you’ll be fine.

Sam says ‘Music helps, I always listen to music…it tends to be quite aggressive music right before I fight?’ She laughs like she’s realizing her routine for the first time, ‘It’s a little bit weird but I tend to slap my legs and arms just to give myself that sting. It probably looks a bit odd. I’ve seen a girl slap herself in the face before – I don’t go that far.’

I think I was just in his shadow for a long time and when we did things we only did them together, but then I thought, ‘I don’t need you, I’ll go do this on my own’

Sometimes, you need the most confidence to simply begin. To plunge into something new. It is Sam’s own unlikely start with jiu jitsu that shows how far confidence can take you.

Sam says: ‘I ended up meeting a guy who did MMA,’ she laughs, ‘We started training when I was 21 and I realized that it was quite fun – I didn’t really realize I took it so seriously. Then we split up and he kind of stopped training and I thought, ‘You know what, I’m gonna continue. I really like this.’ That was the time I really started investing in myself. I think I was just in his shadow for a long time and when we did things we only did them together, but then I thought, ‘I don’t need you, I’ll go do this on my own.’’ 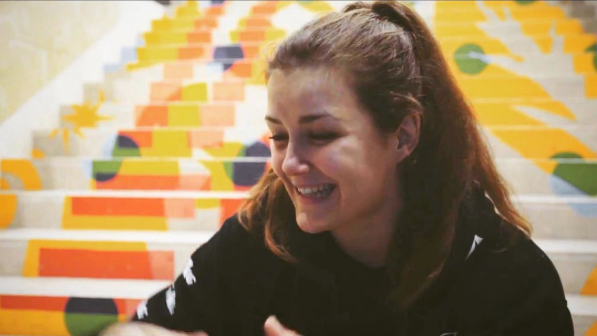 Sam Cook is competing in the Abu Dhabi Grand Slam at Excel, London this weekend. Track her progress here and follow her on Twitter: @SamCook_BJJ and Instagram: samcook_bjj