What is FORREST YOGA?

You probably know your astanga, Iyengar, Bikram and vinyasa.  Now get ready for Forrest yoga, a modern form that’s not only physically intense, it’s an emotional workout too.  Genny Wilkinson-Priest reports

Only the most jaded would fail to be impressed by Ana Forrest, the American yoga teacher who created Forrest Yoga in the years following her harrowing experience as a sexually abused child, drug and alcohol addict, bulimic, epileptic and manic depressive. 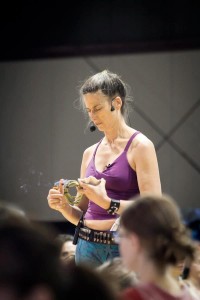 As if her personal story of triumph over such adversity isn’t enough, her physical capabilities at 56 years of age are awesome. I’ve seen advanced yoga practitioners pull off some gravity defying feats, and Ana ranks up there with unbelievable control, flexibility and strength.

I was a first-hand witness to her demonstrations and teaching at a nine-day Advanced Teacher Training in London last month. Along with 37 other trainees, I was put through the ringer with 7 am starts, 4-hour yoga practice sessions, and 3-1/2 hour teaching practice sessions.

Before I started the course, I knew little about Forrest Yoga other than some photos I’d seen on the Internet of Ana looking pretty fierce – she has an intensity that can be scary. I’d seen her balancing on her hands, so I figured Forrest Yoga would be heavy on inversions – yoga-speak for going upside down.

I wasn’t disappointed – Ana’s speciality is arm balances and handstands. She floats up in these, splitting her legs into a straddle and then like a helicopter, moves her legs in slow circles. In some cases, she’s created poses to exploit her physical capabilities, and named them not always in Sanskrit (which let’s be honest can really put off beginners in yoga) but in 21st Century vocabulary: road kill, turn signal, windmill and diving osprey. 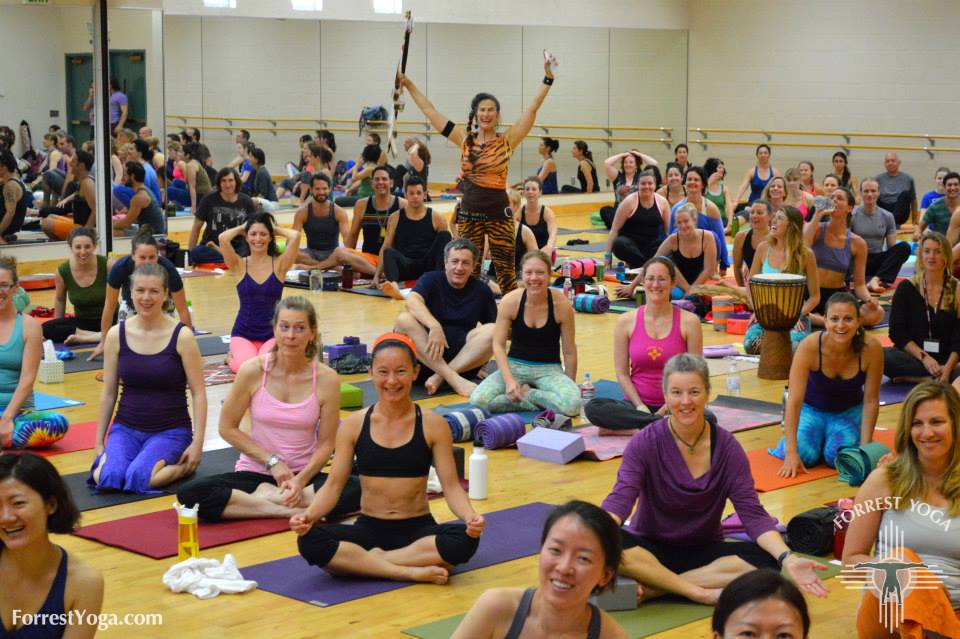 Forrest Yoga is unlike any other yoga school I’ve studied. Ana takes the asana (posture) work from India, but spins it with Native American Indian healing philosophy. (She does not have any Native American Indian blood, but spent some years on a reservation.) It’s all about ‘connecting with your Spirit,’ a rather woolly way of saying find out who you really are, and be true to it when you make practical decisions.

Forrest Yoga is influenced by well-known schools Sivananda, Iyengar and Ashtanga and Ana has studied with the late Pattabhi Jois, the godfather of Ashtanga; and BKS Iyengar, creator of Iynegar yoga.

That Ana has in effect created her own form of yoga is most certainly a break with tradition that many purists are not comfortable with. She rails against tradition – “bullshit,” she replies when asked about the common recommendation against practicing inversions when a woman has her period. 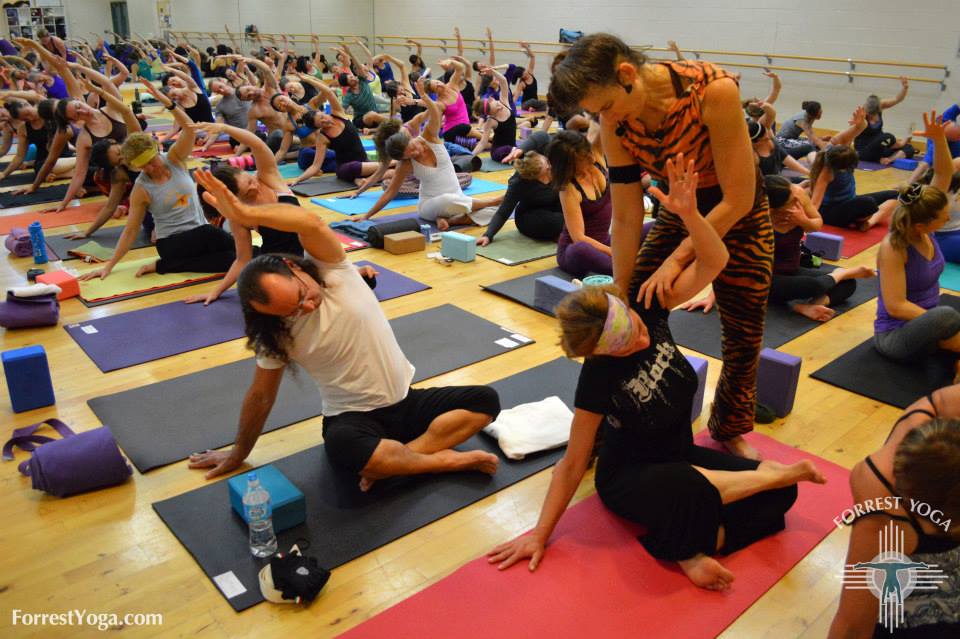 But those attracted to Forrest Yoga (it is pretty well-known in the States, much less so in Europe) seem mavericks themselves. The hardcore of them on my course wore wrist guards like Olympic weight lifters, shouted ear-deafening lion breaths when in a challenging pose (literally, roaring like a lion to expel frustration), and danced madly to the drumming of Native American Indian chants. They wore wildly colourful yoga gear – something Ana recommends so that (at least in the case of the teacher,) he or she can be more readily seen. The best of them wore Star Wars yoga leggings: Chewbacca never looked better than emblazoned on a teacher’s ass.

If all that sounds too weirdly out there, let me assure you Forrest Yoga is still worth trying.

The sequencing of postures is intelligent. You start off with wrist stretches, something that Ana recommends for modern-day life spent at a computer or iPhone, twittering away. Next up is Pranayama, or breathing exercises that are generally not taught in gym yoga classes but in a Forrest class are easy to understand and effective in getting the breath up, which like most yoga styles is a key element of the practice.

Working on abdominal strength is a pillar of Forrest Yoga, and Ana has devised some particularly effective core exercises that will most certainly turn on the muscles in your tummy no matter how dormant you might think they are.

One core posture I particularly hated involved laying on my back, legs in the air with a thickly rolled up mat gripped between my upper thighs. With hands clasped behind my head I pulled the belly down, inhaled and lifted my tailbone and squeezed the rolled mat for what seemed an indeterminate amount of time. 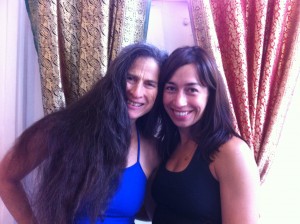 My legs quivered. My belly shook. I wanted to quit but, more afraid of Ana than the burn inside my stomach, I kept going. Over and over again. Nine days later, I could SEE the start of a six-pack in the mirror.

Forrest Yoga is taught in a room heated to 30°C, so I found myself sweating even before I got to the ‘Hot Section’ of class. The Hot Section, as Ana calls it, is the core of the class and where the more difficult postures are taught. Think legs-behind-the-head postures, arm balances such as Side Crow and back bends like Queen Pigeon.

There is always a theme to a Forrest class, I found the most difficult theme was ‘Standing Series,’ where a string of standing postures are held for a long period – up to 25 breaths.

Handstands and arm balances are integral to the practice, and though you might think you don’t have the strength for this, think again. A good Forrest Yoga teacher will offer you alternatives and a road toward building your strength in a safe and accessible way. (Though to be fair, any well-trained teacher be it of Ashtanga, Vinyasa Flow or Anusara will do the same.)

Many of the trainees I met on the course remarked that their backs felt great after practicing even marathon 4-hour sessions. So many people suffer from back problems and thus shy away from backbends, but the system of Forrest Yoga can be curative of this problem.

Ana would throughout the class instruct us to ‘tuck the tailbone,’ which essentially means to actively tilt the pubic bone toward the belly button. The tailbone will then curl beneath you, taking out any excessive curve (and compression) in the lower back – the source of many people’s back pain.

But some experienced yoga teachers (Tias Little comes to mind) say there are other ways to work through back pain as over time, tucking the tailbone can ‘flatten’ the spine, taking out its natural curves. (And if you look at Ana’s spine, it’s has few curves left to it.)

One of the main aspects of Forrest Yoga that I did have trouble with came not in the physical work, but in the mental department. Ana has personally trained all of her teachers to encourage students to look deeply within themselves – pulling up, dealing with and then shifting emotional or physical trauma.

It is not uncommon for students to break down in tears and cry out in emotional pain in Forrest Yoga as they ‘release’ issues. This happened over and over again over the nine days I took the course.  One Forrest Yoga teacher told me this doesn’t happen as much in a class that is not taught by Ana as she has a particular knack for taking people much deeper.

Men and women alike crumbled apart on their mat – usually in a lunging posture, or a hip opener – the theory being that traumatic experiences like the death of a loved one, or an abusive relationship are stored in the body’s tissues and need to be released.

This was pretty new to me – I like to practice in a quiet setting where I can work into a more meditative state as I move. I found it disconcerting to move deeper into Pigeon Pose while the person next to me was sobbing uncontrollably.

Sometimes it took hours for a person to regain their composure. For others, their emotional release lasted but a few minutes. After class, some of them seemed relieved to have shed a layer of trauma. But others still looked forlorn, and I found myself wondering at the wisdom of sending those people home, still upset by what they had experienced on the yoga mat. Who was there to support them? To understand what they had been through?

The British keep calm and carry on as we all know, but I don’t think this is the reason why Forrest Yoga hasn’t taken off in this country. Ana has trained an army of Forrest Yoga teachers in the US where there are 121 teachers, and just 21 in Europe.

Forrest Yoga purports to help those suffering from depression, anxiety and even more serious problems – and I did see evidence of this – but I’m a pretty happy person without much emotional baggage. So it was somewhat bewildering to have one of Ana’s assistants whisper in my ear: ‘Let it all out! Think of your family!’

Not everyone has experienced the same kind of emotional trauma that Ana did growing up. And there are many people who have problems, but shift things in a much quieter way.

As a yoga teacher, I’d be uncomfortable taking students to that point as I’m simply not a trained psychologist or therapist. While I know of Forrest Yoga teachers who have studied Psychology, Reiki or Acupuncture, I don’t believe it’s particularly safe for a yoga teacher to push a student to the point of an emotional breakdown. Yoga teachers alone – at least the ones I know – are simply not equipped to guide a person through the trauma of abuse, addiction and bereavement.

Forrest Yoga can be demanding physically, but a good teacher will modify the postures for even a beginner. More experienced yogis will love it, as you’ll be encouraged to try trickier postures certainly not taught in a gym yoga class. Have an open mind about what might happen on the mat, and keep in mind some Forrest Yoga teachers might push you to ‘let go’ of past wounds, emotionally or physically.

I can’t say I loved my experience with Forrest Yoga. I enjoyed the physical aspect of the practice, but I came away feeling a bit battered by the whole experience. Ana lacks a certain compassion people come to expect from a yoga teacher. She will certainly take you to new levels physically  -see my six pack! –  and perhaps emotionally too, but I kind of like to get to those places on my own.

How to try Forrest Yoga

From September 13 – 15, Ana is teaching a workshop in Berlin.  For further information about this event, and future workshops/trainings, click here

She also has a book out recounting her story as an abused child, bulimic and addict: Fierce Medicine (£9.99 HarperOne from Amazon).