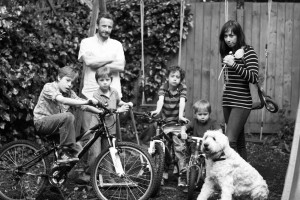 Mum of four Genny Wilkinson-Priest (pictured left with her family) practiced an intense and gymnastic form of astanga yoga right up until she gave birth to her four sons. Here she responds to the critics of weightlifting mum-to-be Lea-Ann Ellison, currently at the heart of an online storm

Poor Lea-Ann Ellison. A media furore rages over photos of her powerlifting at eight and half  months pregnant.

I can relate – throughout my four pregnancies right up until the day I gave birth, I practiced Ashtanga Yoga, a particularly heart-pumping, intense form of yoga that when done traditionally demands its practitioners rise at 4 am, six days a week to sweat through demanding yoga poses.

For some strange reason, people think they are not only entitled to have, but also share their vociferous opinion on a woman’s pregnancy. Not only did I have friends shaking their head at me, telling me to stop, but also complete strangers.

I would nod my head politely (though not always) and keep doing what my body instinctively knew was right and good. I had been practicing yoga for years. Pregnancy isn’t an illness; it’s a condition. I wasn’t about to put my feet up on the couch and stick my face in chocolate cake for nine months.

Four times I’ve grown a baby, and I always listened to my body. It told me what it needed and what it didn’t. What I needed was to kick up into handstands and throw my legs behind my head. I nourished not only my body with yoga, but my baby because I was happy. I was breathing. I was moving. I was stress-free. A mother knows best, and I knew Dante, Roman, Casper and Toby were loving the ride. I swear at times I could hear them giggle as dropped into a backbend.

Each time I found out I was pregnant, I felt elated at the prospect of growing a life inside of me. With my first pregnancy, I worried about how it might change my yoga practice. That sounds terribly vain and selfish, I know, but yoga to me was and is like eating – I couldn’t go a day without it.

That’s not to say I didn’t modify my practice. I toned down the vigorous nature of my practice in the first trimester, knowing that was the most sensitive time in a pregnancy and mindful that I mustn’t raise my internal body temperature. I kicked things into a higher gear in my second trimester, returning for the most part to the form I had before pregnancy.

Certain postures, of course, I couldn’t do – anything that required me to lie on my belly. And I was careful in headstand to have a wall nearby just in case my shifting weight compromised my ability to balance on my head.

I listened to my body. There were days when I was tired, so I practiced lightly, or not at all. There were days when my lower back ached, so I dropped my beloved backbends. Very occasionally I felt dizzy on the mat when doing Triangle Pose. Knowing my blood pressure was low and causing the dizziness, I backed out of the posture.

I did my research – I read books and consulted with top pregnancy yoga teachers. I talked to my doctor. I knew that the hormone relaxin floods the body in pregnancy, causing the tissues around the joints to loosen. It was easy for me to go too far in a yoga posture and injure myself so I was always careful to never cross my “edge,” that point where the body should not move further.

The point here is that I was responsible for myself and for my baby. To those people criticizing Lea-Ann Ellison, I say this: You are not in her body. You cannot possibly know what she feels she needs. Do you think a woman is stupid just because she’s pregnant?

Lea-Ann Ellison is an established, professional body builder. She’s been doing it for years, and just because she’s pregnant doesn’t mean she has to stop. It means she has to think a little more carefully, sure. But I’m betting good money that she has made the necessary adjustments to accommodate her precious cargo.

I wish Lea-Ann Ellison all the best in the remaining days of her pregnancy. I think she kicks ass, and I bet when her baby grows up, he/she is going to be really proud that their Mama did what she knew was best.