Jan Tilley, a retired midwife with 40 years’ experience in the NHS brings you the common reasons behind babies’ crying and exactly what to do about them –  plus advice if you’re travelling with a newborn

Of the 679,100 babies born in England and Wales last year, there’s one thing they all have in common.  They cry.

As for the reasons, well, if newborns could speak, parents everywhere would look and feel a lot less stressed. But they can’t, so many new mums and dads are left lost, panicking and literally holding the screaming baby, not knowing how to help their little ones.

Whether you’re off on holiday with a newborn or negotiating bottles and nappies in the comfort of your own home, there’s nothing better than the voice of experience to help allay panic and provide a friendly (and tried and tested) word of advice. 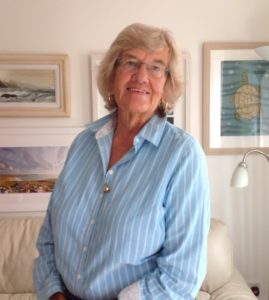 Jan Tilley (left) is a 60-something retired midwife specialising in dealing with baby ailments.

After 40 years’ service in the NHS advising new mothers on how to manage their newborns, Tilley has seen just about every common baby ailment.

In this holiday baby care practical report, Tilley talks to Healthista editor Anna Magee, using her calm voice and infinite knowledge to deliver a step-by-step guide to recognising the common ailments behind a typical baby’s crying – especially during travel – and exactly what helps.

‘You can fly with a newborn from as young as two days old,’ says Tilley. ‘But do check with the airline as each will have a different policy regarding the minimum age a baby has to be to fly.’

When you’re flying with a baby, just like adults they’ll get bunged up noses which cause them pain, especially in the ears.

As a result, they will often scream the aircraft down, until the parents finally figure out a way to settle them down.

‘The crying is because the baby is terribly uncomfortable as the air pressure causes the eustachian tube to swell,’ says Tilley.

‘As this tube connects the nasal cavity to the middle ear, the baby can feel terrible pain in its ears.

‘As with adults who are often given a sweet to suck on for relief, giving the baby a dummy or soother can help because the sucking action provides fluid that can calm the nasal passages and ease the pressure.’

But what if the baby’s nose is blocked at the same time, won’t the baby not be able to breathe? ‘Yes, but if that is the case the baby will simply spit the dummy out,’ says Tilley. 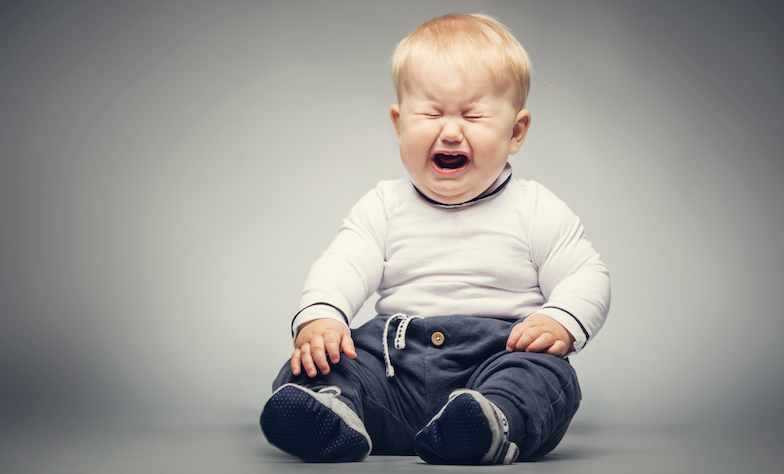 ‘A small baby can’t blow its nose in the same way a bigger child can, so mums and dads need to keep an eye out for the crusty bits around the baby’s nostrils that can signal they have a blocked nose.’

But don’t panic if your child seems to be getting lots of colds and snuffles, says Tilley. ‘Babies need to be exposed to minor bugs such as bacterial and viral infections to help build up their immune systems’.

Indeed according to the NHS, it’s normal for a baby to get around eight colds a year.

What to do: ‘Nasal drops will help if the baby’s nose is bunged up with mucus,’ says Tilley.

‘The nasal drops from Snufflebabe (£3.05 for drops and £4.07 for spray from Boots) contain only saline so are gentle and also come in spray or dropper form which is convenient for flying.

‘Saline nasal drops will dissolve the dried mucus and reduce the crustiness and if you’re flying, a few drops in a baby’s nostrils before you take off can make a great prevention strategy,’ says Tilley.

But then as adults know, often nasal drops don’t work – there’s simply too much snot in there.

‘If nasal drops don’t work, you can follow them with a baby nasal aspirator,’ suggests Tilley.

‘These are little contraptions you can get from your chemist. Once you have applied nasal drops, put one end gently into the baby’s nostril and the other end into mum, dad or nanny’s mouth who then gently sucks out the mucus.

Tilley recommends Snufflebabe’s Nasal Aspirator (£8.49 from Boots) because ‘it has a reservoir in the middle which is more hygienic than other aspirators because it catches the mucus on the way up, so the parent doesn’t get it in their mouths.’

It’s all about the practical, after all.

There are different types of crying in babies, Tilley asserts, and a baby crying who has colic is usually easily identifiable.

‘A really high-pitched crying with a baby drawing its knees up to its chest, with the baby often going red in the face, is a fair indication of colic,’ says Tilley.

Colic is the name for excessive, frequent crying in a baby who appears to be otherwise healthy, affects up to one in five babies and usually disappears once a baby turns six months old.

‘This kind of crying often occurs in the late afternoon or evening and can last several hours, leaving parents feeling exhausted and tense, says Tilley.

What to do: ‘Try and have patience with the baby and relieve any tension – babies can sense this – and comfort and hold the baby,’ advises Tilley.

‘You can also try colic drops such as those made my Dentinox (from £2.02 from Boots),’ she says.  ‘If you were to put some of these into a cup of foamy water, the suds would disappear.  If the reason for your baby’s colic is a build-up of gas and bubbles in their tummy, these drops will work a treat’.

But it may be more complicated and there are some reasons to see your doctor.

For example, if the baby has a weak, high-pitched, or continuous cry, seems floppy when you pick them up, isn’t feeding, is vomiting (see below), has a fever of 38C or above (if they’re less than three months old) or 39C or above (if they’re three to six months old), turns blue, blotchy, or very pale, has breathing problems, such as breathing quickly or grunting while breathing you should get them to a doctor. 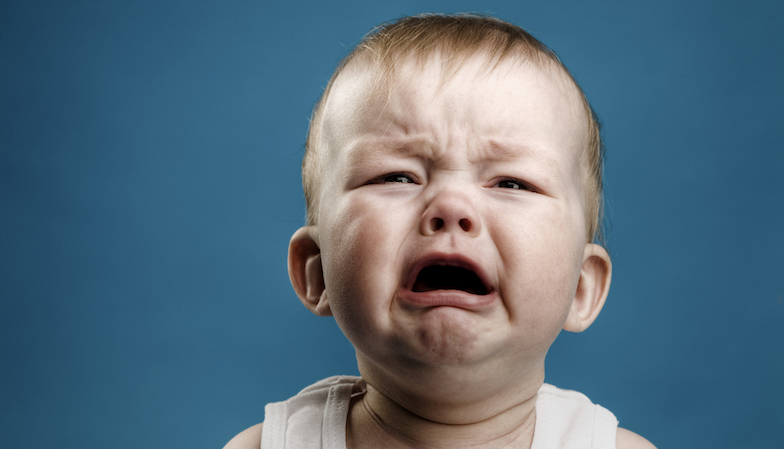 ‘If you’re going to a hot country – or even in the current heat in the UK – heat rash is probably the key reason babies get uncomfortable and cry because they’re not used to the climate,’ says Tilley.

‘But a baby’s skin isn’t able to cope with it as well because they don’t sweat like adults do so it’s important to cool babies down as much as possible.

What to do: ‘Start by using tepid water on a washer and wiping the baby down, ensuring they’re in a cool atmosphere or at least in some shade and cover them with some cotton covering,’ Tilley advises.

‘Ensure the baby isn’t wearing or wrapped in man-made fabrics when the weather is hot – anything elasticated such as onesies will usually contain some man-made fabric that won’t be as breathable as pure cotton which gently absorbs heat and helps keep the body cool,’ asserts Tilley.

To prevent a baby overheating, put on a fan in the room but not in the direct line of the baby, she advises.

‘If they are still grizzling and scratching, apply some old-fashioned calamine lotion (£1.25 from Superdrug) – it is the best remedy for heat rash.

‘Of course, if a baby’s rash is accompanied by a temperature of over 38 or 39 degrees centigrade, it’s important they see a doctor,’ says Tilley. 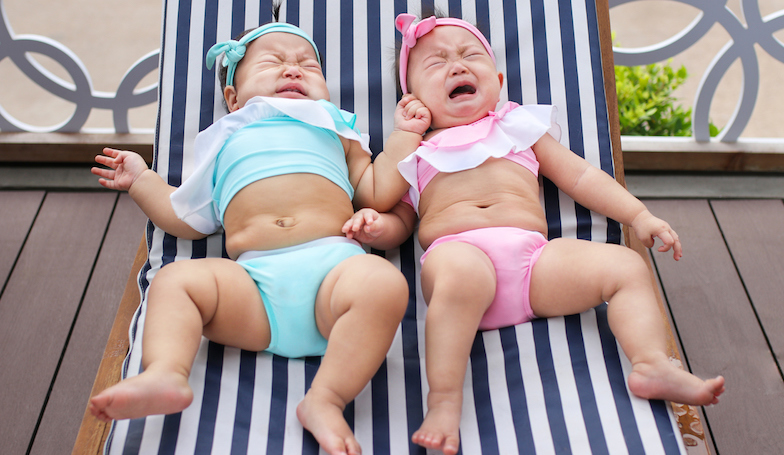 ‘In continental countries people still smoke a lot and even if this is outside, it can really irritate a baby’s nasal passages,’ says Tilley.

‘Moreover, it’s often drier on the Continent, there’s more pollen and bits drop off trees such as those you might sit under for shade – all of that can be irritating for a baby’s breathing and nasal passages, especially if it’s a climate and environment that’s different to what they’re used to back at home.’

What to do: ‘Watch out for general sputtering and coughing in a baby,’ says Tilley.

‘If they’re obviously reacting to a new environment, you can use some vapor rub on the baby’s tummy if they’re more than three months old.

‘During the day, try and keep the baby upright in its swing so any excess mucus can drain.

‘At night, if they’re younger than three months, try a few drops of vapor oil containing eucalyptus, tea tree and lemon into a bowl of warm water by the cot to help calm the baby and clear its nose,’ says Tilley.

‘We never advise pillows for babies, but you can put a rolled-up towel under the top of the mattress to slightly elevate the baby’s head.

‘If the baby is not sleeping, not eating and especially not drinking [see below] it’s important to see a doctor as quickly as possible.’ 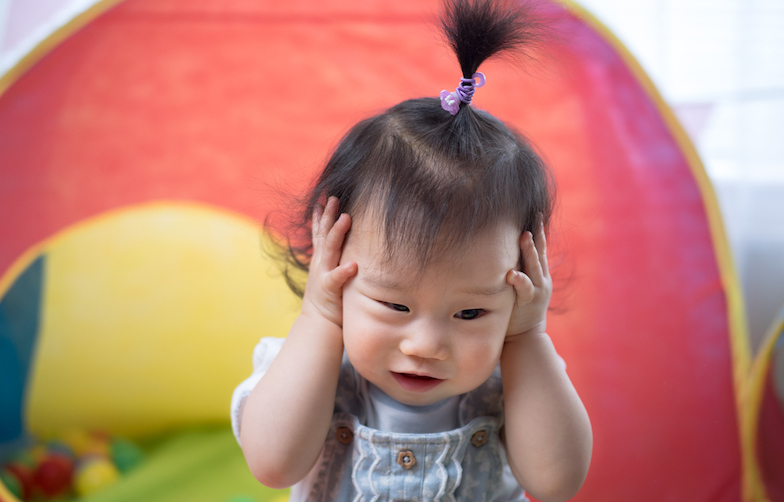 ‘And you’re supposed to be the grown-ups?’

‘A baby who is crying because of diarrhoea or vomiting is very serious,’ says Tilley. ‘This is mainly because of the risk of dehydration which is life-threatening because a baby that loses fluids deteriorates very quickly.’

A baby who is breastfed will be far less likely to get diarrhoea and vomiting infections as they are less exposed to potential infection than bottle-fed babies, Tilley asserts.

What to do: ‘Get to emergency or a doctor as quickly as possible and in the meantime try to get fluid in the form of boiled cooled water into your baby with gentle droppers or a bottle,’ says Tilley.

Parents need to be aware of the signs their baby is dehydrated, especially on holidays in warmer climates or during the very hot weather in the UK, Tilley advises.

‘When it’s hot, the baby must be given more fluids,’ says Tilley. ‘If a baby is breastfed, it’s far less likely to get dehydrated because mum can just pop the baby onto the breast when the baby wants it.’

What to do: ‘If the baby is breastfed, let the baby feed as much as they want,’ suggests Tilley. ‘If they are bottle fed, give them their normal formulas with lots of extra drinks of cooled boiled water in between’.

Support groups, such as Cry-sis, can also help and advice if you need it. You can contact the Cry-sis helpline for advice on 0845 122 8669 (9am-10pm, seven days a week). They are the UK’s only charity set up specifically to help parents deal with their crying babies.

12 ways to increase your fertility – the expert’s guide