6 signs of zinc deficiency that ruin your looks

These signs of zinc deficiency could be the reason your hair isn’t as thick as it used to be and for those spots on your nails or chin. Anna Magee talks to the experts about who’s at risk and how to fix it

Zinc is not called the beauty vitamin for nothing. It’s second only to iron as the most abundantly found mineral in the human body and among its key functions are keeping skin, hair, teeth and nails healthy, not to mention the functioning of our libidos and immune systems.

‘Zinc is required for the activity of over 300 body enzymes, and these enzymes help to bring about biochemical reactions in the body that are essential to protein synthesis, hormone production, as well overall radiance and wellbeing,’ says public health nutritionist Emma Derbyshire. Despite the importance of zinc, many of us could be deficient she says.

A recent survey of women of childbearing age in 14 countries found that over one in five had low zinc levels and, according to the World Health Organisation, some 31 per cent of people globally are deficient in zinc.

Who’s at risk of deficiency?

‘Strict vegetarians and vegans may be at risk of zinc deficiency due to them typically having high levels of phytic acid in their diets which can reduce zinc absorption,’ says Derbyshire. ‘Phytates are found in foods such as wholewheat, legumes and whole grains’.

Other people at risk could be those who drink lots of alcohol because it inhibits the body’s absorption of zinc. According to Gill Jenkins, a London NHS GP, ‘you might also have a deficiency if you have a condition that sheds a lot of skin such as eczema and psoriasis because they lead to increased cellular turnover that can result in a deficiency.’

Those most at risk though, says Derbyshire are those who try and avoid red meat. ‘As red meat is one of the richest sources of bioavailable zinc in our diets, vegetarians and vegans can be at high risk of deficiency as meat alternatives contain much less zinc.’

A recent study published in the journal Nutrients revealed that women who eat less than 40 grams of red meat daily were four times more likely to have intakes that could lead to a deficiency compared to those that ate around 70 grams of red meat a day.

In fact, ‘according to the National Diet and Nutrition Survey, one in five British children and 5% of adults have intakes which fall below those needed for good health,’ says dietitian Carrie Ruxton.

‘Signs of low zinc status include a weakened immune system, more colds and poor wound healing, tiredness, and low sex drive’. However, other key zinc deficiency symptoms, such as those explained below, may be staring back at you every time you look in the mirror: 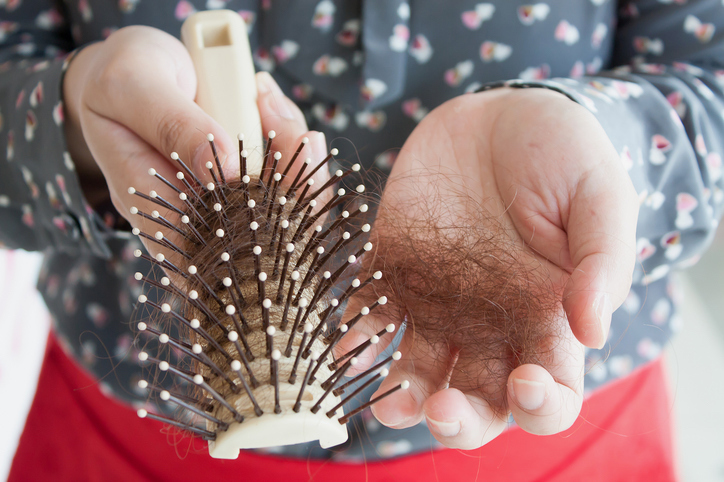 ‘Along with recurrent infections, hair loss is probably one of the key symptoms we think about when we think about zinc deficiency,’ says Dr Jenkins.

Zinc is essential to good cellular replication and protein absorption and these functions are essential to thick, glossy hair. ‘Most GPs wouldn’t do zinc level testing though,’ she explains.

‘Instead, we would advise people to either take a multivitamin or increase their dietary source, or both.’ A 2013 study in the Annals of Dermatology on 312 people with hair loss found that all had lower zinc concentrations in their blood than those in a control group.

The good news? A 2009 study in the same journal found that supplementing with zinc daily for 12 weeks was enough for 66% of the patients in the trial to see an improvement.

Vitabiotics Perfectil Triple Active provides good zinc supplementation and is available to but on Amazon in the US and in the UK.

#2 You have brittle nails with white spots on them

White spots on the nails – sometimes called Beau’s lines – are one of the key giveaways of zinc deficiency, says Emma Derbyshire. Your nails may be slow-growing, brittle and easily cracked too, she explains.

This is because a steady level of zinc in the body is needed for the growth of tissue and cells in the nails and when this is lacking, general nail problems can occur, which at its worst, can manifest as white spots.

The good news? Start eating a diet rich in zinc and your nails may be the first thing to show signs of improvement. 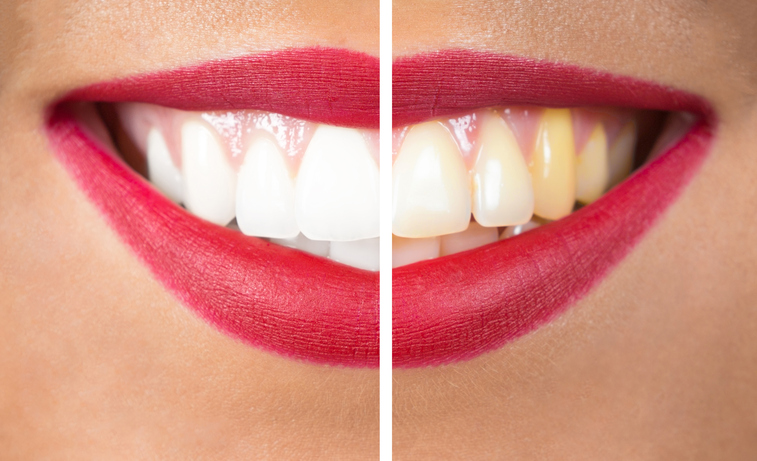 Zinc is essential to healthy teeth and ‘If you have low zinc levels, you aren’t going to have nice shiny white teeth, they may instead be easily cracked and not very strong,’ says Dr Jenkins.

To find out why, Healthista spoke to James Goolnik, a dentist at Bow Lane Dental Group, London.  ‘Zinc is an essential element and in the mouth and is present naturally in plaque, saliva and enamel,’ says Goolnik.

‘If someone was deficient they might notice an odour sensitivity, altered taste, white tongue coating and perhaps be more likely to develop mouth ulcers [see below] plus inflamed gums – these are most common if people are deficient in zinc from their diets’.

#4 You have mouth ulcers

A lack of zinc in the diet can also cause recurrent mouth ulcers, Goolnik says.

A 2014 study in the The Journal of Laryngology & Otology found low zinc levels could increase the risk of oral ulceration and patients who showed low levels of zinc in their blood stream often had recurrent attacks of ulcers.

In fact, some studies have found that supplementing with zinc could decrease inflammation in the mouth from ulcers that might also be related to cold sores.

#5 You have spots or other skin issues 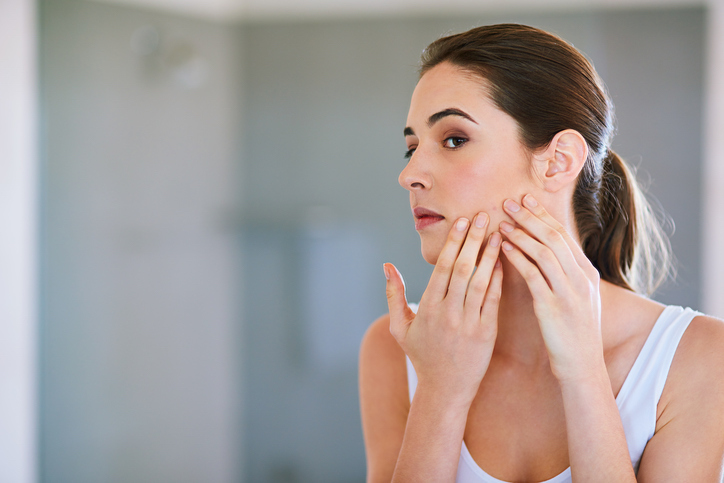 ‘There is a theory that those that get acne may be deficient in zinc and some treatments and antibiotics for acne often contain zinc,’ says Dr Jenkins.

Staggeringly, one study in the Journal of the Turkish Academy of Dermatology 54% of those with acne had low zinc levels.

‘People with zinc deficiency may also present with generally scabby skin that shows sores and marks that don’t heal or take time to heal as zinc is essential to wound healing,’ Dr Jenkins explains.

#6 Your bones are weak

Everyone talks about calcium for bones, but zinc is an essential mineral required for bone growth and formation, says Dr Jenkins, thanks to its function in cellular growth and development as well as the collagen turnover needed to make healthy bone.

Children of vegetarians or vegans on very strict diets can often become deficient in this mineral which can be a problem in the development of their bones through childhood and teenage years.

Obviously, you won’t know the state of your bones but you can ask your GP for a DEXA scan which measures bone density (most NHS GPs won’t measure zinc levels in the blood unless they’re convinced of serious deficiency).

Getting your daily zinc needs

Our bodies don’t store zinc so we have to get it from food and if you’re vegan, vegetarian or don’t eat much red meat, you may be deficient.

‘Red meat such as beef, pork and lamb are among the best sources because the zinc in these foods is highly bioavailable – that means our bodies can more easily absorb it compared to other sources,’ says Carrie Ruxton.

‘Experts recommend that we eat up to 500 grams of cooked red meat a week,’ she says. 70 grams a day or 100 grams five times a week is a good guide.

Slow cooked red meat has an even higher zinc content than meats cooked in other ways, says Emma Derbyshire.

‘Additionally, new evidence suggests drinking milk may help the zinc absorption from high phytate foods such as lentils and grains,’ she says. Great tip for vegetarians and vegans.

Whether you’re a red meat eater or not, you don’t need much of the right type of zinc-rich food to get the 7mg you need a day for health. Check out the table below to see exactly how much zinc you get from every day foods. 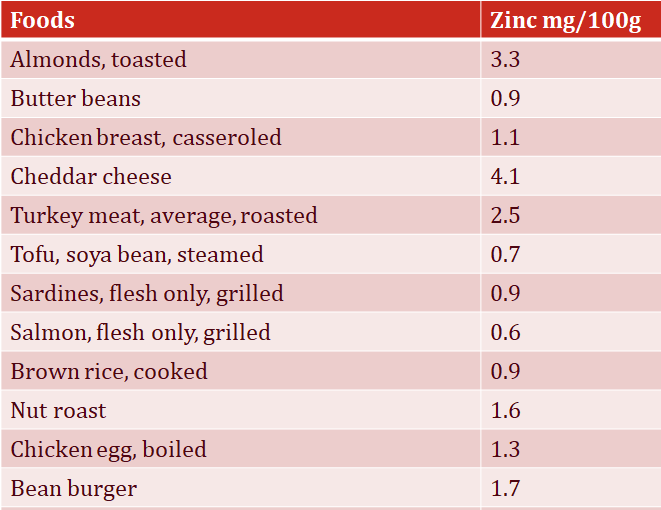 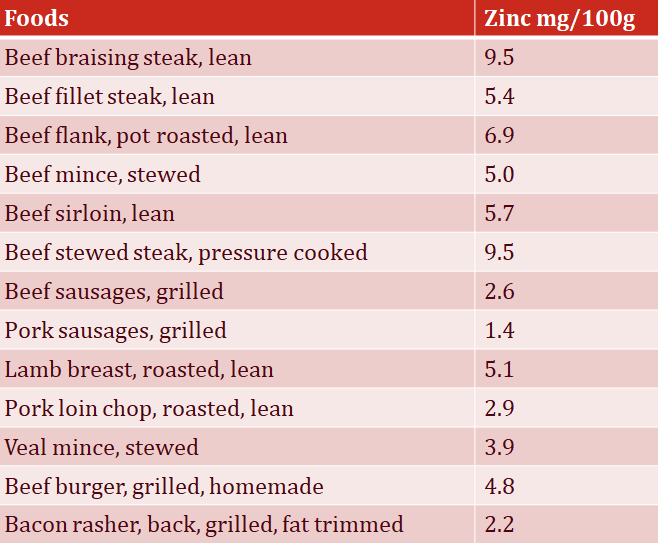 The anaemia epidemic – is iron deficiency making you tired all the time?